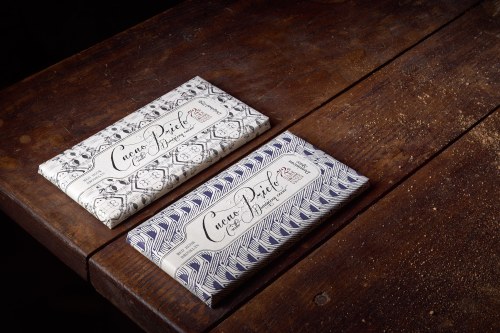 Since the Mast Brothers‘ emergence from Brooklyn in 2007, craft chocolatiers have become an integral part of the urban Northeast’s artisanal foods scene. Of course the Mast Brothers are practically a household name at this point, but their former position as ‘those chocolate folks from Brooklyn’ is no longer a tenable title as three other companies also hailing from the area seem to be gaining a strong foothold: Fine & Raw, Raaka, and Cacao Prieto. Being the least familiar with the latter (as their distribution seems to have the smallest radius), we were intrigued when we came upon them recently; first by the nicely typeset, open-framed boxes of their organic, single-origin fruit-and-nut ‘bark bars’, and then by the decadent packaging of their Criollo series. Impressive production standards, including the fact that they own and operate the farm their cacao and sugar both come from, made the decision final.

As now seems to be expected of craft chocolate producers – at least in Brooklyn – Cacao Prieto has a factory/store which offers tours and tastings of both their chocolate and a variety of liquors (many infused with cacao) that they also produce in-house. Their founder, Daniel Prieto Preston, is a former aerospace technologies inventor, a background which after moving into the role of chocolatier he brought to the field in order to invent and improve upon various chocolate-making machines he felt had yet to reach their full technological potential. Chief among these is Prieto Preston’s Vortex Winnower – a custom winnowing machine which is made to separate cacao nib from husk to a degree of exactitude that has until now been otherwise unachievable.

In trying to select two bars which might best represent their general approach, we went with Original and Dominican Spice, though other flavours such as Orchid and Absinthe were also tempting.

You can’t help but take notice of the Criollo series’ packaging. It’s attractive. That said, beyond simple aesthetics it becomes a bit problematic. In this line of bars, the design appears to be directly referencing the Dominican Republic’s colonial history, as well as another popular export from the republic: cigars. Here we find the company’s name ‘hand-written’ on a cigar-style label in a script that feels designed to give the impression of its having been penned by an early colonist-turned-plantation owner. These labels impose themselves on the underlying ‘primitive’ patterning which appears to be very vaguely hinting at the idea of traditional Dominican art or textiles. Then to make things official, the outer label is reinforced with an embossment of the Prieto seal, putting the final stamp on this miniature drama of semiotics. Of course, we aren’t assuming any of these details are intentional, but feel they warrant mentioning.

Once unwrapped, the two bars appear identical in colour, which makes sense as all their cacao is of the same hyper-specific origin. Their minimalist gridding stands in sharp contrast to their highly stylized exterior packaging. There’s no bas-relief artwork cast on the bar’s top, no geometric texturing of each square, just chocolate effectively divided into rectangular pieces. The background connecting all the pieces is both disarmingly thin and reassuringly sturdy, making for an easy and clean breaking off of each bite, as well as an unaffected minimalism and lightness that feels very contemporary.

Biting into the bars, we were both immediately underwhelmed. Where’s the cacao fruit? Hidden beneath the dark roast perhaps, as that’s most of what we found we were tasting. The roast is, in its own right, lovely, but it definitely makes for a much more uniform flavour profile, one that is far more distanced from its roots than we expected from a company that so touts the distinctiveness of their ‘terroir’. Texturally too, the degree of smoothness, though impressive, didn’t do anything for us. Initially exciting, the silky extremity ultimately felt artificial, similar to ice cream made with a Pacojet. Likely appealing to some, but not to us.

The Original bar was a subtle experience. With none of them being particularly distinctive, most of the flavours we found had to really be reached for. There was an element of dried fruit, specifically one of raisin, which was nicely distributed throughout, giving it a good rounded balance. The high, slightly fruity, pre-bitter part of coffee was present as well. Overall though, it’s just a really well-made, ‘classic’ chocolate. Classic in the sense that it tastes familiar and comforting, favours roast over fruit, and strives for uniformity in its texture. It would make for a really great s’more.

Dominican Spice defied our expectations as well, but in a much more interesting way. Knowing it was to contain allspice, clove, cassia (cinnamon), and nutmeg, we were prepared for the spices to be much more heavy-handed; a ‘flavoured’ chocolate bar. We were instead confronted with a very tastefully balanced ratio of cacao to spice. Achingly restrained, so delicately handled that it felt more like an example of a slightly different varietal than an alteration of the bar we’d just tried. For the most part, none of the spices stood out on their own, but together formed something akin to a mild winter tea or a good eggnog. In different moments, we briefly tasted dried blueberry, chicory, and at one point a spiciness that was difficult to attribute a source to.

It should be said that we have definite preferences in chocolate bar styles. Generally, we like to experience the cacao plant itself in some way, whether that’s by highlighting its true fruitiness, or by leaving enough texture behind to help draw attention to its original seed state. Cacao Prieto produces bars that do neither of these things, but with that said, for a certain and other taste, these could be near ideals.

Despite our indifferences, the bars are undeniably strong from a technical perspective. Nothing is wrong with them, per se. They’re smooth, rich, and incredibly well-balanced. They may not be carving out radically new territory in the field of chocolate bars, but they’re certainly refining aspects of it. There’s a lot of subtlety to their craft, and the basic ingredients are all highly traceable and seem to be coming from an excellent source. Though they’re not our cup of tea, we do appreciate Cacao Prieto’s intended trajectory.

One Comment to “Cacao Prieto – selections from the Criollo series”